In case the car battery went dead, most of the drivers are already familiar with the solution: a jump start, or a battery charge, or even a new battery and back on the road. And you think that everything’s fine, right? Except now your car radio doesn’t work…!

You don’t have to worry, though. In most cases, fixing a car stereo that quit working after the battery died is a lot simpler than you think.

There is a solution for this problem, too! Let’s find it out together!

The most common reason for a car radio to stop working after the battery has gone completely dead is that the radio has an anti-theft “feature” that kicks in whenever battery power is removed. When that happens, all you have to do is enter the right car radio code, and you’re back in business.

In certain rarer cases, you may be dealing with a damaged radio or even damage to other electrical systems other than your radio. For instance, if your radio stopped working after a botched jump start, the radio—and other delicate electronics—could have been fried.

More specifically, here are the most common causes for this type of problem:

Damage done during a jump start

​​Electrical system components can be damaged during a jump start if precautions aren’t taken. Check the relevant fuses and fusible links before you condemn the radio. If the radio has both power and ground, then it probably has an internal fault.

In other words, if you’re lucky, it might just be a fuse, and if you’re not, then this will just have to serve as a lesson as to how important it is to hook up jumper cables and battery chargers correctly.

​​If your radio flashes “code,” then this is probably the issue you’re dealing with. Car stereos with a code feature require you to input a preset code any time the battery dies or is disconnected. The code may be in your owner’s manual, or you might have to contact a dealer.

​​While a dead battery, or a jump start, can result in a car radio that doesn’t work, it could also be a pure coincidence.

But let’s see the above situations one by one:

Damage due to an Incorrect Charging or Jump Start

If your car radio stopped working after a jump start, or after a battery charge, then the problem might be related to a car radio code anti-theft feature. Before you do anything else, you’ll want to rule that out. Make sure that your radio doesn’t have that feature, and if it does, verify that entering the correct code doesn’t get the radio up and running again. If it doesn’t, you might be looking at a bigger problem.

The issue is that while it’s perfectly safe to jump start or charge a car battery, when the procedure is carried out correctly, it’s extremely unsafe when the procedure isn’t carried out correctly. The biggest danger in jump starting or charging a battery is actually related to the explosive nature of the hydrogen gas that can leak from a lead acid battery.

This is why the final cable you hook up should always be a ground cable, and it should be hooked to ground, rather than the battery. If you hook directly to a battery, and any hydrogen gas has leaked from the battery, the resulting spark could ignite the gas and cause an explosion.

Beyond the danger of actually exploding your battery, which I’ll assume didn’t happen, since a dead radio would be the least of your concerns at that point, hooking up jumper cables or a charger wrong can also cause electrical system damage.

If the cables were hooked up backwards at any point, and your radio stopped working as a result, then the radio may well be fried. And quite aside from your radio, any number of other components could also be fried.

If your radio is dead due to a botched jump start or charge, and you’re lucky, then you may find that your car radio fuse is blown. In some cases, it may be the fuse located inside the radio, while in others it may be the fuse in the car’s fuse box.

This is why it’s so important to know how to hook up jumper cables and to never, ever let anyone, no matter how well meaning, hook them up wrong. 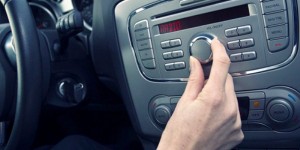 Car radio codes are meant to act as a sort of passive anti-theft feature.      When power to the radio is cut, the feature kicks in, and when power is  returned, the unit is basically bricked until you enter a specific code. The  readout may display, ever-so-helpfully, the word “code,” or it may just  remain blank, or it may display an even more obtuse message, depending on the manufacturer.

The best way to deal with a car radio code is to not deal with it at all. If you have a radio with this feature, and your battery hasn’t already gone dead, then you’ll want to figure out the code and write it—and the reset procedure—ahead of time.

The process for finding out a car radio code differs from one make to the next, but you’ll generally want to start by looking in your owner’s manual.

If you bought your car used, the previous owner may have written the number down in the manual, and some manuals actually have a place to do so. If it isn’t there, then you can check the OEM website or contact your local dealer, although you may end up having to pay a local shop or online service to look the code up.

When two things happen at exactly the same time, it’s easy to just assume that they are related. And in the case of dead batteries and dead car radios, there’s a definite chance that the problems are related. However, you may find that your car radio suddenly quit working for a totally unrelated reason.

For instance, if your radio turns on and displays a station, but no sound comes out of the speakers, then it’s probably an issue with the speakers, the wiring, or even the antenna. In that same vein, a car stereo with a non-functioning radio may be tracked down to an antenna problem if other audio sources, like the CD player, work just fine.

Whatever the problem is, don’t panic, as there is always a solution to take you out of trouble!